Or…How to Lose a Race in Ten Ways…

Planning for the Diva Half Marathon & 5K at St. Augustine was a breeze. My running partner, Laurie, would send me daily messages…

bam, I booked a room at this bed & breakfast…

ooh, actually, let’s stay on this boat; oh wait, I get seasick…

look at this Airbnb. Let’s stay here (can’t recommend this place enough!). We can make pizza to carb up– look at this recipe…

let’s have pizza here—but I thought we were making pizza—yes, but I forgot this place makes the best pizza (and Pizza Time did)…

And I would go with the flow, and she would plan as she is wont to do because, let’s face it, she’s really good at it. I just had to pay for my half marathon entry and show up.

There must be training before running a half marathon. So when the race weekend arrived and we had done no training, we changed from the half marathon to a 5k—“downsized,” she called it.

I will have no problem if we just drink and eat and have fun and otherwise sleep through the 5k, I offered.

#3 Carb up the Night Before…and Wine?

The morning of the run, much wine consumed,

Laurie’s eyebrows and some of her hair singed from the fire pit she lit, we may have, indeed, decided to sleep through the race if it weren’t for the bells ringing. The 6 am church bells ringing?

Was that your phone alarm, I asked.

I thought it was yours, she answered.

And we were up.

#4 Get to the Race on Time…and Coffee

We made it to the race early.

Let’s get coffee, I suggested.

A Circle K, let’s see if they have donuts.

we were ready to go.

And the best idea of all…

let’s be the last ones to cross the start line.

We accomplished Laurie’s idea of crossing the start line last, deciding to also be the last to cross the finish line. We had a goal!

We sized up the group of four women who looked as if they had the same idea. We got this. You will not beat us. We will be the biggest (and happiest) losers ever!

Two girls straggled upon us at the one mile marker, and we realized, to our great dismay, we were not the last to cross the start line. But I had a plan…

We stopped at mile 1 to take pics.

You should take pics, I suggested to the late-comers.

Here, let me take pics of you. It’s the one mile marker.

And in one move of what appeared to be a helpful runner helping another runner commemorate her race, I had wasted time and spaced out the distance between us and the four women and the one solo runner. The two girls ran ahead. We were a sure thing for last place.

Last place, it turns out, is not an easy accomplishment. The four women after turning to look to see if we were still behind finally gave up and decided to move on. The solo woman, however, wanted it badly.

We stopped so I could tie my shoe. It wasn’t untied.

We stopped to take a listing for a house for sale.

We asked people cheering along the way if we could get a refill on our coffee. We stopped at the water station and helped them clean up.

We moved the giant orange cones off the race path.

Rick from NYC riding a moped at the back of the race kept us company, and I like to think we kept him entertained. “You’re keeping me from going back to bed,” he said. We came upon a man playing music, but he was packing up. He quickly turned on the music for us while the race photographer gave us a high five. He’d already packed up for the day.

Laurie started walking backwards. We stopped to hug the woman who donned us with our tiaras and boas. We congratulated the 5k runners who had already finished, happily eating their bananas, sporting their medals. 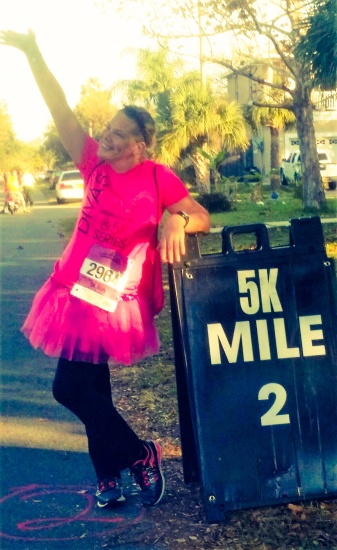 We crossed the finish line at.. actually, let me look it up…1 hour 8 minutes and 22 seconds.

And…fulfilling my competitive spirit, I came in dead last! I beat Laurie at coming in last!

It’s probably alphabetical, Laurie said, for we have the exact same finish time.

And that, my friends, is how to lose a race while really really trying.

One thought on “The Biggest (and Happiest) Losers”

This is a text widget. The Text Widget allows you to add text or HTML to your sidebar. You can use a text widget to display text, links, images, HTML, or a combination of these. Edit them in the Widget section of the Customizer.

This is a text widget. The Text Widget allows you to add text or HTML to your sidebar. You can use a text widget to display text, links, images, HTML, or a combination of these. Edit them in the Widget section of the Customizer.